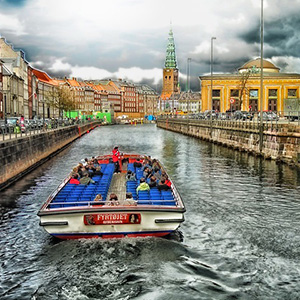 If you’re in search of a different European experience, just head north to the intersection of yesterday and tomorrow. Old meets new and tradition meets innovation on this cool tour of Scandinavia and its most exciting hot spots. With two-night stays in the capital cities of Denmark, Norway, Sweden, and Finland, you’ll wake up to Copenhagen’s rush hour of designer-clad cyclists, Oslo’s stunning skyline “starchitecture,” Stockholm’s trendy galleries and gastro pubs, and Helsinki’s electrifying design scene. Within these hipster hubs, you’ll follow ancient Viking trails and the narrowest of cobblestone streets to the palaces and museums that hold the most fascinating historical stories—and the indoor and outdoor markets that carry the most intriguing snacks and souvenirs. The cool factor is illuminated on a breezy overnight cruise across the Baltic Sea from Stockholm to Helsinki.Vodka wishes and caviar dreams are sure to come true when you extend your tour of Scandinavia to Russia. Leading you to the country’s two largest and most fascinating cities, this 6-day extension doubles the blinis, borscht, and Baroque architecture as you savor the sights, history, and flavors of Russia’s former and current capital.

Elegant is the word that will come to mind.

As you take in the Danish capital’s rich history and traditions. With castles and crown jewels, galleries and museums, cathedrals and canals, the sightseeing ranks among the best in Europe.

The Strøget is a series of pedestrian-only streets which make strolling and shopping a pleasure. And be sure to visit Tivoli, a unique combination of picture-perfect flower gardens, lakes, theaters and restaurants with more than 100,000 colored lights.

Graceful design, imaginative architecture the Finns have long been admired for their beautiful buildings, gardens and parks. You’ll enjoy visiting them too, as you pass all styles of centuries past and present, from medieval to neoclassical, as well as the superb ultramodern creations by Aalto, Saarinen, and other Finnish masters.

Situated at the head of a 60-mile fjord, Oslo, Norway, one of the oldest of the Scandinavian capitals, is beautifully framed by a vast expanse of woods, moors and lakeland. A blend of 19th- and 20th-century architectural styles, Norway’s capital is known for the wood carvings and colorful frescoes that decorate its buildings and public spaces.

Wasn’t Leningrad here a minute ago? Maybe a few years ago, but since the fall of Communism this shining jewel of a city has reverted to its original name, St. Petersburg, named for Peter the Great, who built it as a fortress in 1703.

Elegant facades, glorious cathedrals and grand residences were built along the city’s canals. Construction flourished under Catherine the Great, and the city gained new splendor with elaborate palaces, lovely parks and magnificent squares designed by French and Italian architects. St. Petersburg is the most European city in Russia, and the most
spectacular.

Founded as a fortress in the 13th century, Stockholm eventually grew to become the capital of Sweden. It is a city of remarkable beauty with numerous parks, tree-lined squares and boulevards, and pleasant water vistas. To grasp the full character of Stockholm, visitors must hop from island to island, each of which boasts its own personality. Sergels Torg, a central square located in Norrmalm, serves as the focal point for modern Stockholm. On Helgeans Holmen, the tiny island
immediately south of Norrmalm, sits the Riksdagshuset (Parliament Building), followed by the medieval Gamla Stan (Old Town) island and then the large Sodermalm, a bohemian enclave in a former blue-collar quarter.

Across the Strommen (the Current) lie the two scenic islands of Skeppsholmen and Kastell-Holmen. Farther east, Djurgarden Island houses a number of city museums and connects to the northern Ostermalm, a pricey residential neighborhood that adjoins Norrmalm sprawling across 14 islands, the Swedish capital has always enjoyed an ideal
commercial location at the confluence of Lake Malaren and the Baltic Sea. As a result, a forest of high-rise office buildings and condominiums has grown up beside the medieval castles that once guarded Sweden’s strategic waterways. Founded in the mid-13th century, this former outpost developed into a vibrant capital in the 17th century, when landscapers and architects began to build elegant parks and squares that rivaled those in the finest European cities.

Today, picturesque Stockholm boasts a stunning combination of man-made gardens in its center and natural scenery on its outskirts, where sun-lit lakes shimmer in the pine-clad countryside.

Prices are per person, land or cruise only, based on double occupancy. Offer subject to availability and change without notice. Some restrictions may apply. Please ask us for details.

Charges not included in the land vacation price: airfare to and from the start of your vacation; airline baggage fees including checked and/or excess baggage fees; Federal inspection fees for the Federal U.S. Customs and Immigrations; agricultural tax; other per person taxes imposed by government entities; applicable cruise taxes, fees, fares and port charges; passports; visas and vaccinations; transfers; tips to your Tour or Cruise Director, Local Host, driver, Local Guides, and/or ships’ crew; gratuities on ferries, trains, and cruise ships; laundry; telephone; minibar; alcohol, beverages, and food outside of the contracted menu as presented at a hotel or restaurant (these extra items will be billed to you before leaving the hotel, ship, or restaurant); additional excursions and activities not listed as ‘included’ in the itinerary; porterage at airports or train stations; Travel Protection premiums; and all other items of a personal nature.

Click on the buttons below to request a quote on this deal or contact us directly with further questions or comments.

Request A Quote Send To A Friend Have A Question? Contact Us

Send To A Friend